I’m starting a new feature on my blog called First Kiss Fridays where authors share a first kiss story be it good, bad, or ugly. First up is my friend Kara Taylor, author of the PREP SCHOOL CONFIDENTIAL series, books that are guaranteed to get your heart racing and knock you out with one of the sassiest, funniest teen voices I’ve ever read. I really love this series, so to celebrate the release of WICKED LITTLE SECRETS (and to celebrate this being the first ever First Kiss Friday), I’m doing a giveaway below.

Five months after my best friend moved out of state, and a few weeks before my fourteenth birthday, I kissed her boyfriend.

They were broken up, obviously, because long-distance relationships in eighth grade are like creatures out of a Harry Potter novel: They don’t exist. But in my head, he was still her boyfriend. Even though we’d all stopped hearing from her months ago. Even though she swore through an AOL Instant Message (remember those?) that it was okay for us to go out with each other.

He was a nice boy, and shy. The type that would tell your friends he liked you and hope for the best. He couldn't admit to liking me for some reason (which many years and therapy sessions later, I attribute to the fact that I expressed my insecurity by being intimidating and mean to boys). So he made my friends guess.

After weeks of making circles around each other, he asked me out via AOL Instant Message. It was early March, which made hanging out alone together difficult. In eighth grade, “dating” consisted of your parents dropping you off in the village to hang out with “friends.” On a Saturday morning, we met at the playground. And we realized it was really, really freaking cold.

He had on the heavy yellow sweatshirt he wore all winter. We laid down on the slide, and I put my hands in his pockets to warm up. We had the playground to ourselves. (It was 30 degrees, so it was a lot less romantic than it sounds.) After laying there not saying anything for a while, his lips found mine. I didn’t realize it until many years and crappy kisses later, but my first kiss was perfect.

For weeks afterward, I wondered if he was thinking of her the whole time. So naturally, I dumped him for my ex-boyfriend. I wasn’t very smart about the whole thing, and it kind of got worse. In fact, the next four boys I kissed weren’t my boyfriends at all. (Luckily, they weren’t anyone else’s boyfriends.)

Ten years later, I’ve found my prince: If there’s any universe in which a guy who makes up songs about his own flatulence can rightfully be called a prince. But I don’t regret all the frogs in between. I never asked the boy in the yellow sweatshirt if I was his first kiss too, but I like to think I am.

KARA TAYLOR is the author of PREP SCHOOL CONFIDENTIAL, WICKED LITTLE SECRETS and the upcoming DEADLY LITTLE SINS (St. Martin’s Press). She also writes for television. She’s represented by Suzie Townsend of New Leaf Literary. She lives on Long Island with her prince and a cat named Felix. 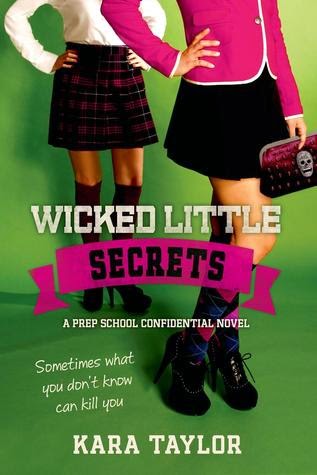 I'm giving away a copy of WICKED LITTLE SECRETS (Trust me, you want this book. You really, really do. I'm in the middle of devouring it right now.), and if that wasn't enough, Kara is throwing in a copy of PREP SCHOOL CONFIDENTIAL, plus a signed bookplate and bookmark! (Note: giveaway ends April 11th at 11pm. Available to US entries only.)

There's a book coming out. In two days. It's called SIDE EFFECTS MAY VARY, and I am so excited about this book I can't even tell you! I hope my rabid fan-girling doesn't scare debut author Julie Murphy ;)

To celebrate, some other 2014 debut authors and I are posting our bucket lists (because bucket lists are kind of a big thing in the book - see the description below). If I wrote up a whole bucket list, it would probably have about 80 billion things on it, so here's a list of 17 things I've always wanted to do (14-17 I accomplished this year and 1-5 I think I can do in the next year or two!):

1) Run the Peachtree Road Race (a 10K in Atlanta, where I live)
2) Cook a 7 course dinner (I’m enlisting the help of my husband with this one. We’ll probably do a Brazilian themed menu because he wants to go there so badly he taught himself Portuguese this year.)
3) Be an extra in The Walking Dead (filmed in Atlanta, so I could totally make my zombie dreams a reality!)
4) Eat a Guanábana – also called Soursop (They’re this crazy looking fruit that grows in Mexico and Central and South America, and they’re supposed to taste like strawberry and pineapple but with the creaminess of coconut and banana. YUM. I’m going to see if I can find one at this international farmer’s market nearby.)
5) Get a book published (So close!!)
6) Visit every state (27 down!)
7) Go on a road trip of National Parks
8) Go to Australia and hold a koala bear and see all the other cool animals too.
9) Snorkel in Rurutu, French Polynesia when the whales migrate with their calves.
10) Go to Africa during the great annual migration (Over a million wildebeest and zebras! Can you tell I like animals?).
11) Ride in a hot air balloon
12) Learn to surf
active lava flow 13) Do a sprint distance triathlon (Sprint = the shortest one there is.)
14) See an active lava flow
15) Go to every color of beach (white, yellow, black, red, green – I just went to the last one, the green one, this year.)
16) Ride a snowmobile
17) Get my PhD 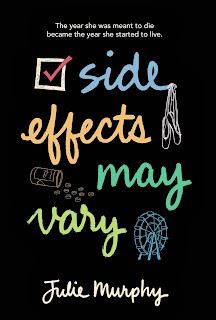 What if you’d been living your life as if you were dying—only to find out that you had your whole future ahead of you?

When sixteen-year-old Alice is diagnosed with leukemia, her prognosis is grim. To maximize the time she does have, she vows to spend her final months righting wrongs—however she sees fit. She convinces her friend Harvey, whom she knows has always had feelings for her, to help her with a crazy bucket list that’s as much about revenge (humiliating her ex-boyfriend and getting back at her arch nemesis) as it is about hope (doing something unexpectedly kind for a stranger and reliving some childhood memories). But just when Alice’s scores are settled, she goes into remission.

Now Alice is forced to face the consequences of all that she’s said and done, as well as her true feelings for Harvey. But has she done irreparable damage to the people around her, and to the one person who matters most?

Julie Murphy’s SIDE EFFECTS MAY VARY is a fearless and moving tour de force about love, life, and facing your own mortality. BIO:
Julie lives in North Texas with her husband who loves her, her dog who adores her, and her cat who tolerates her. When she's not writing or trying to catch stray cats, she works at an academic library. Side Effects May Vary is Julie's debut novel. Julie can best be found on her website (www.juliemurphywrites.com), tumblr (www.andimjulie.tumblr.com), or twitter (www.twitter.com/andimjulie).