I won this ARC on Goodreads.

The Cover and Stuff:
I liked the cover. I know some people have compared it to Hush Hush (I think it was Hush Hush), but it stood out to me. I like the dark clouds and I like the font. I don't know that it necessarily says "time travel," but I don't care. I still like it.

And now for the other stuff. Tempest (the ARC, at least) has stuff on it's covers like "The first book in an epic trilogy" and "A major success already in the making" and how Summit Entertainment (the people that made Twilight) are already going to be doing a movie with it. So first, it feels kind of weird since the book isn't even out yet. And second, it sets the bar really high. But I know none of that is under the author's control, so on with the review.

Tempest gets off to a fast start. The voice hooked me on the first page, and it was fun being inside the head of a teenage boy (even if his thoughts were occasionally girly for a boy). I love books and movies about time travel, so I was excited to see where this was going. And I did end up liking Tempest, but not OMG-fan-girl loving it.

Here's what I liked:

- Every scene with Jackson's little sister. These were incredibly moving. I think I cried over that letter he wrote her.

- The plotting. It's amazing. This will be a great movie.

- The ending was very fast paced and exciting and leaves you wanting more.

- Also the scene with the smoothie, I really loved.

Here's what I didn't:

- Some of the time travel stuff confused me. And just so you know, I am getting a PhD in Neuroscience right now, so it's not like I suck at science. I think part of it was that sometimes Jackson's information about time travel would change, and I had never seen time travel done this way, and it made it that much harder to keep up with what was currently true.

And now to talk about the Holly stuff, because I have a lot to say about her. I didn't love her. I didn't hate her or anything, but I just couldn't see what was so special about her. And since everything driving the plot of Tempest hinges on the reader loving Holly, this was an issue. There is so much drama surrounding her, and Jackson makes so many decisions based on their love, I kept thinking, 'Man, if I liked Holly, I would be freaking out right now.' She needed to feel like the epic love of his life. But to me she just felt like a perfectly acceptable girl to be dating while waiting for "the One."

I've been trying to figure out why it is I didn't like her more. I think part of it is that Jackson wouldn't confide in her, so it made me not take their relationship seriously. He confides in Adam, his friend, but not Holly. And it was supposed to "protect her," but I felt like there was this boy's club that she couldn't be a part of. The whole trend in YA of protecting females by withholding information or making decisions for them without their input really bothers me. But I'll hop off my soapbox and get back to my review.

Ultimately, I did like this book and I'll probably go see the movie.

View all my reviews
Posted by Rachael Allen at 3:53 PM 9 comments:

IF I LIE Cover Reveal

Today I'm very pleased to share with you the cover of IF I LIE by Corrine Jackson. It's the first time I've ever been part of a cover reveal, so I'm pretty psyched about it! 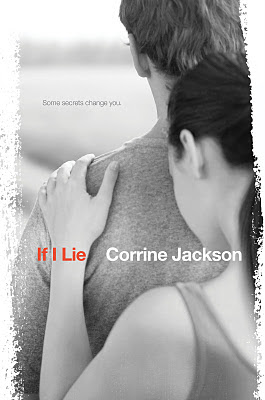 Isn't it gorgeous? I love the font and the black and white shot and how the tag line "Some secrets change you" gives me shivers. But most of all I love the intensity. There's something about the hardness in the way his back is turned to her and the hopelessness of her head against his shoulder blades that tells you this relationship is packed full of complex emotions.

Here's the blurb:
A powerful debut novel about the gray space between truth and perception.

Quinn’s done the unthinkable: she kissed a guy who is not Carey, her boyfriend. And she got caught. Being branded a cheater would be bad enough, but Quinn is deemed a traitor, and shunned by all of her friends. Because Carey’s not just any guy—he’s serving in Afghanistan and revered by everyone in their small, military town.

Quinn could clear her name, but that would mean revealing secrets that she’s vowed to keep—secrets that aren’t hers to share. And when Carey goes MIA, Quinn must decide how far she’ll go to protect her boyfriend…and her promise.


IF I LIE debuts on August 28, 2012, and with this cover and that description, I'll definitely be picking up a copy!


Add to your Goodreads shelf here.
You can find Corrine Jackson on Twitter, Facebook, and her blog.
Posted by Rachael Allen at 8:26 AM 8 comments: 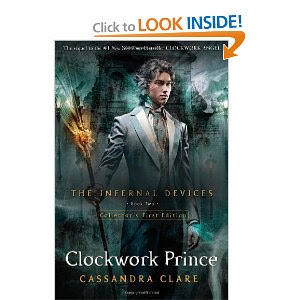 I got to see Cassandra Clare speak at the Decatur Library last week, and she is a trip. She's witty and snarky and awesome, and, man, does she have some fangirls. I've never been to a book signing where so much squealing was involved. She could give the Biebs a run for his money.

Anyway, her book CLOCKWORK PRINCE just came out this month, so to celebrate, I'm giving away a SIGNED (yes, signed!!!) copy.

Here's how you can win it:
1) Be a follower of this blog.
2) Leave a comment telling me you want it.

There are so many books that just came out or will be out soon that I am dying to read. Um, so here's a list:


Zombie Tag by Hannah Moscowitz (coming soon!!!)
Isla and the Happily Ever After by Stephanie Perkins (not coming soon enough. sigh.)
The Future of Us by Jay Asher and Carolyn Mackler
Divergent by Veronica Roth (I know, I know, I should have read this already!)
Anna Dressed in Blood by Kendare Blake
Shut Out by Kody Keplinger
Larkstorm by Dawn Rae Miller (Just came out December 6th! And my friend Dawn wrote it! And you can win it here if you hurry with the quickness.)

Ansley had a packed social calendar this fall, including her first pumpkin carving (we didn't actually let her do any carving, she mostly just gummed the pumpkin) and her first Ga Tech Homecoming Game. Go Jackets! We won! 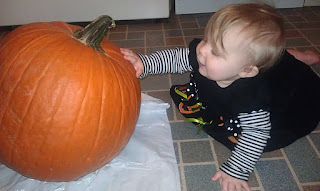 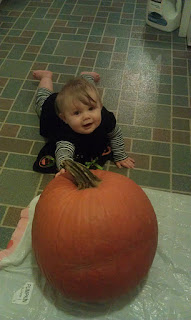 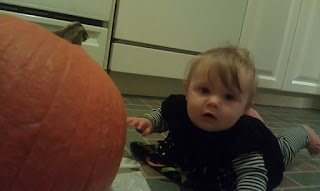 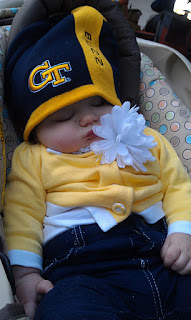 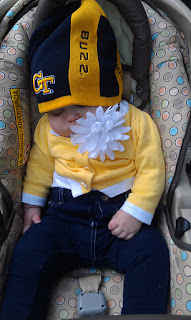 I know, I know, I should have posted these a month ago, but things have been CRAZY with school and are just now starting to calm down.

In case you don't already know, Zack and I are really big on Halloween. We begin planning our costumes months in advance, and they often involve things like wigs/spray glue/every tube of green body paint in the city of Atlanta. This was our 8th Halloween together (one year Zack was out of town), and this one was really special because it was our 1st Halloween with Ansley. Instead of our usual couples costume, we had to find a theme for the whole family. The possibilities were endless.

After intense debate over the best way to utilize a baby in a Halloween costume, we decided on Alice in Wonderland. Here's a picture of me as Alice and Ansley as the white rabbit. She is checking her clock to discover she's late for a very important date. 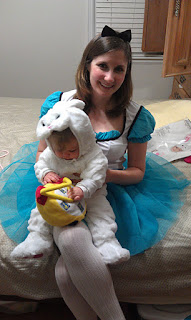 In this shot, Ansley is looking at the camera. Doesn't she look happy about her bunny costume? 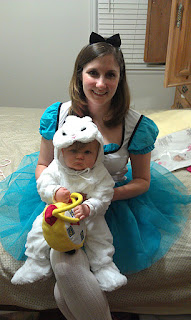 Is anyone else reminded of this? 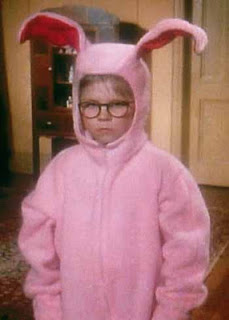 Here's one of Zack as the Mad Hatter. I'm pretty proud of my make up job! Ansley actually cried the first time she saw him with the wig on, and it took us a few minutes to convince her that it he was still her daddy under all that orange hair. 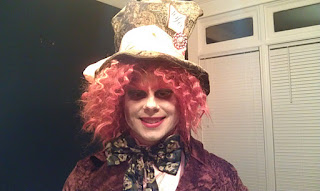 And here are a couple of Ansley asleep at her first costume party. 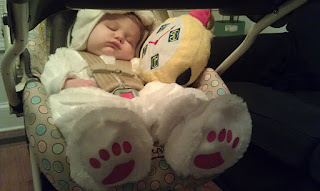 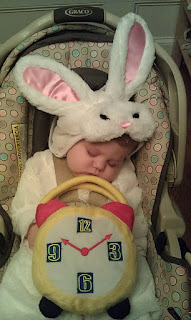 The post below is not a mistake. Well, it is, but not the kind you're thinking. I had opened up a fresh, new blog post with the intention of updating you all after my school-induced absence, but Ansley decided she needed to post first.

Somehow in the ten seconds it took me to refill my glass of water, Ansley managed to maul my computer (I swear, she waits for me to get up so she can do this), type her post, and hit send. She has moved on to Daddy's playstation. It's a good thing he's in the shower.
Posted by Rachael Allen at 5:35 AM 6 comments:

Posted by Rachael Allen at 5:18 AM No comments: